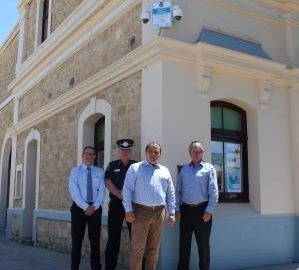 Member for Barker Tony Pasin has delivered on a $160,700 promise for increased CCTV cameras in Murray Bridge with a network of 32 cameras in 14 locations now operational across the rural city.

“Our Government is committed to keep Australians safe and secure by enhancing the efforts of local councils and community organisations to address crime and antisocial behaviour,” Mr Pasin said.

Australia wide the Federal Government has delivered over $130 million in crime prevention projects, to assist local Councils and communities in tackling crime and anti-social behaviour.

“By empowering local organisations and councils to improve their security infrastructure, addressing crime and anti-social behaviour, the initiative increases perceptions of safety and cohesion, fostering viable and vibrant communities into the future. That’s what we want here in Murray Bridge.” Mr Pasin said.

Mr Pasin said the camera system in Murray Bridge was already paying dividends with camera footage leading to at least one arrest since the cameras have been fully operational since late December.

“I promised to deliver this funding to make Murray Bridge safer and I’m really pleased see the project now complete and already delivering outcomes for the community,” Mr Pasin said.

This new camera network now provides a significant resource to Council and the Local Service Area of SAPOL to deliver improved public safety across Murray Bridge.”

Today I had the pleasure of catching up with Nathan Woodrow, a local Riverland man, who at just 22 years of age is a fashion entrepreneur and founder of Ryde Clothing.

Ryde Clothing has become a successful, independent adventure and lifestyle brand that recognises and interacts with a range of local business’ and brands.

Its fantastic to see young entrepreneurs across Barker following their dreams.

Hope you bought one from him 🙂

Many young South Australians have been aspirational Paolo Sebastian had his gowns on the red carpet at the Oscars by the time he was 20, sadly the media love showing youth in a bad light