Home LEST WE FORGET IN BARKER
Back to top

LEST WE FORGET IN BARKER

This year in marking Remembrance Day I am paying a special tribute to five individuals who enlisted from Barker who would have turned 100 this year.
In sharing their stories I hope to honour their memory and that of their fellow servicemen and women. 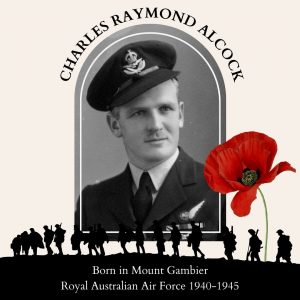 Charles Raymond Alcock was born in Mount Gambier on 12 December 1921. On 23 September 1940, he enlisted in the Royal Australian Air Force (RAAF) at Roseworthy, South Australia, as a flying officer in 1 W.A.G.S. He fought in World War II, and later with the Royal Air Force in Britain. He was honoured with the Distinguished Flying Cross, ‘For courage and devotion to duty in flying operations against the enemy.’ He discharged from the Air Force on 23 October 1945, returning to Mount Gambier and in 1964 he joined the Nature Conservation Society of South Australia. He went on to be a prolific collector for the State Herbarium of South Australia and volunteered with them after his retirement. He passed away in Hope Valley, Tea Tree Gully, South Australia, on 8 September 2015, aged 93 years. 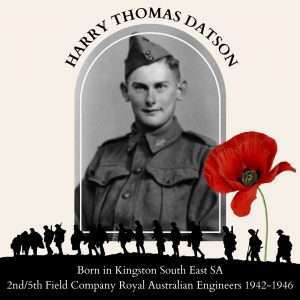 Harold (Harry) Thomas Datson was born in Kingston South East on 22 August 1921. Datson served in the Citizens’ Military Force (CMF) from October 1941 before enlisting as a sapper on 7 August 1942 at Puckapunyal as part of the 2nd/5th Field Company (Squadron) Royal Australian Engineers (RAE). He served in New Guinea and Balikpapan, Indonesia before he discharged on 11 April 1946. He passed away in South Australia on 11 April 2011 at the age of 90. 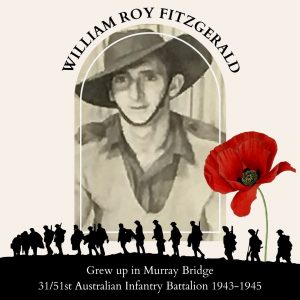 William Roy Fitzgerald was born in Keith on 6 September 1921 and grew up in Murray Bridge. He enlisted in Field, South Australia on 11 June 1943 as a private in the 31st/51st Infantry Battalion. William Fitzgerald was killed in action on 1 February 1945 in Bougainville, Solomon Islands at the age of 23 He is buried in Bomana War Cemetery in Port Moresby, New Guinea. 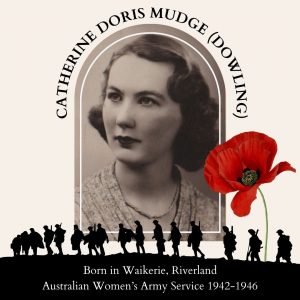 Catherine Doris Dowling, later Catherine Mudge, was born in Waikerie on 7 January 1921. She had worked as a salesgirl prior to enlisting as a gunner in the Australian Women’s Army Service on 10 December 1942, at Wayville. She discharged as a private on 18 July 1946 in Queensland. Catherine married Gavin Mudge on 17 November 1948 and passed away on 24 December 1999. 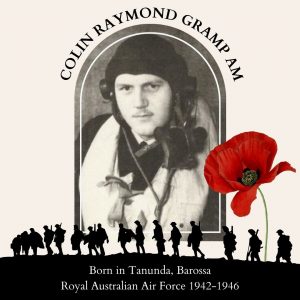 Colin Raymond Gramp, AM was born in Tanunda, South Australia, on 4 October 1921. He was an apprentice wine-maker before joining the RAAF as an air gunner in July 1942, training at Victor Harbour, Ballarat and Sale before sailing to Britain. He completed No 29 Course at Coastal Command’s No 4 Operational Training Unit at Alness in Scotland and, with his crew, joined No 461 Squadron in March 1944 with the rank of flight sergeant. At that time, he had 85 hours flying experience, of which 75 hours was on Sunderlands. During his tour at No 461 Squadron, he flew 550 hours in 49 operational sorties, as well as 190 hours of non-operational flying. For his service, he received the 1939-1945 Star, Atlantic Star with France Germany Star Bar; Defence Medal; War Medal 1939-45; Centenary Medal; and in 2015, the Ordre national de la Légion d’honneur, ‘for those who risked their lives in the service of France during the Second World War.’

He discharged on 6 March 1946 and returned to the Barossa where he had a long career as a wine-maker, pioneering a cold-pressing technique used to create Barossa Valley sparkling riesling in the 1950s. In 1986 he was awarded a Member of the Order of Australia ‘in recognition of service to wine industry technology.’ He passed away in Tanunda on 7 August 2020.

What a absolutely amazing day on the banks of Lake Bonney celebrating Australia Day with the Berri Barmera Council and community.
Congratulations to all those who we acknowledged today with Australia Day honors and to those who joined our great nation as Australian citizens we say welcome to the greatest country on earth!

Yes congratulations to you all

You serve a lot of voters happy Australia Day mate